Skip to content
After a long struggle with addiction, veteran finds physical and financial stability 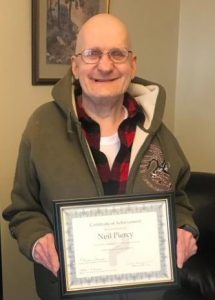 No stranger to Telamon, Neil participated in Telamon programs in West Virginia for over 15 years. Born and raised in Elkins, West Virginia, Neil served in the U.S. Army. Upon completion of his military service, he relocated to Martinsburg to build his life as a civilian. Regrettably, Neil was arrested and accused of a crime. He served his time, but he continued to struggle with alcoholism for many years. With Telamon-TRC’s support, Neil was able to overcome his most challenging personal hardships.

Neil’s first experience with Telamon-TRC was as a participant in Victory House program, but he was discharged due to his chronic substance abuse. For ten years, he remained homeless staying at the local Rescue Mission while trying to abstain from alcohol. Sadly, Neil relapsed and was asked not to return to the Rescue Mission. Desperate for a second chance at Victory House, Neil reached out to Telamon-TRC for help once again.

With Telamon’s assistance, Neil was admitted in the Victory House program where he remained for two years. During that time, he was committed to maintaining sobriety, earning an income and working toward self-sufficiency. Neil was also approved for government benefits, and he gained employment through a work experience program (WEX) with Goodwill Industries. He was on his way to financial security and stable housing!

Shortly after, Neal was falsely arrested due to clerical error. After spending two months in the County jail, he contacted the Housing Family Mentor for help. Even though all the criminal charges were dropped, he lost his job. Neil was devastated.

Telamon’s housing family mentor worked with Neil to help him overcome his setback. Neil eventually rebounded, but his health declined drastically. Telamon staff stepped in to advocate for him at the Veteran Affairs Medical Center (VAMC). After several months, the VAMC accepted him into its health maintenance program to help him get to regain his health. Four months into the program, Neil was back on the right track and ready for stable housing.

Telamon helped Neal get accepted into the Transition In Place (TIP) program so that he could live independently. While Neil was in TIP, he worked with Telamon’s housing advisors to ensure that he was in a financial position to maintain his housing long term. Neil and his roommate continue to live peaceably together, making their apartment a forever home. Today, Neil walks up and down his street or sits on his front porch enjoying the sounds of chirping birds and children playing nearby. He often calls the Telamon office just to say “hello.” Stories like Neil’s demonstrate the transformative power of the dedicated support and guidance that our programs offer.

Since 1965 Telamon-TRC has helped individuals like you access services that lead to better jobs, better lives, and better communities. Find a Housing & Financial Empowerment program near you today!