When Brandy found her local Head Start program, she was a single mother looking for help with the financial burden of day care. She thought that if she put her daughter, Brianna, in a morning program subsidized for families in need, she could spend save money on day care.

Little did she know that Telamon Delaware Head Start would forever change her life and put her and her children on a path to success.

“Without a doubt, our lives would have been totally different,” she said. “They pushed me to improve myself and strive for more.”

Some 15 years later, that then single mother has become a college-educated professional with a job as a grant specialist for the National Science Foundation. Brianna, her oldest child, who wants to study environmental engineering, is entertaining multiple college offers. Her other three children — Brittany, Braney, and Michael — also attended Head Start and continue to excel in school.

Brandy’s story is not unique.  As Telamon Corporation and Head Start both celebrate their 50th anniversaries this spring, families across Delaware are recalling how their lives have been transformed by what many consider a preschool program. But Telamon Delaware Head Start is so much more.

“It is a testament to our former leadership that Telamon has achieved 50 years of successful services to a wide range of communities,” said Doris Rizek, state director for Telamon Delaware Head Start. “What we do is provide the building blocks towards self-sufficiency. By doing it right, we literally change lives.”

Telamon Corporation has operated in Delaware since 1979. In 1986 Telamon became the Head Start grantee in Kent County. Since, Telamon Delaware Head Start has provided services to more than 10,000 low-income families and their children in Sussex and Kent counties, operating 14 centers and serving 900 children

“At the heart of what we do is empower families to become self-sufficient and provide them with the resources and support they need to be their child’s first teacher,” Rizek added.

Telamon Delaware Head Start program targets the child’s social, emotional, psychological and nutritional needs to ensure that children start school ready to learn and succeed. Studies have shown that Head Start children are significantly more likely to complete high school and attend college than their siblings who did not attend Head Start.

“Because my kids attended Head Start, I felt like they had a great advantage when they started school. I can’t say enough about how much this program helps the entire family,” said Rosalie, 67, of Seaford. She enrolled the three grandchildren who were in her care during the 1980s. She is so thankful to Head Start that decades later, she remains involved as a Foster Grandmother, reading to children at the Laurel facility.

Today, a granddaughter of Rosalie’s – Denicia Youmens, a former Head Start preschooler, is a state health coordinator for Telamon.

A place for families to find encouragement and hope

Telamon Delaware Head Start has evolved into an ally and mentor for low-income families. Parents have access to a community that helps them find the services and skills they need to create more stable and secure lives for their children. Through partnerships with Delaware organizations such as $tand By Me®, Telamon connects low-income families with financial literacy programs and job training to achieve financial stability and rise out of poverty. 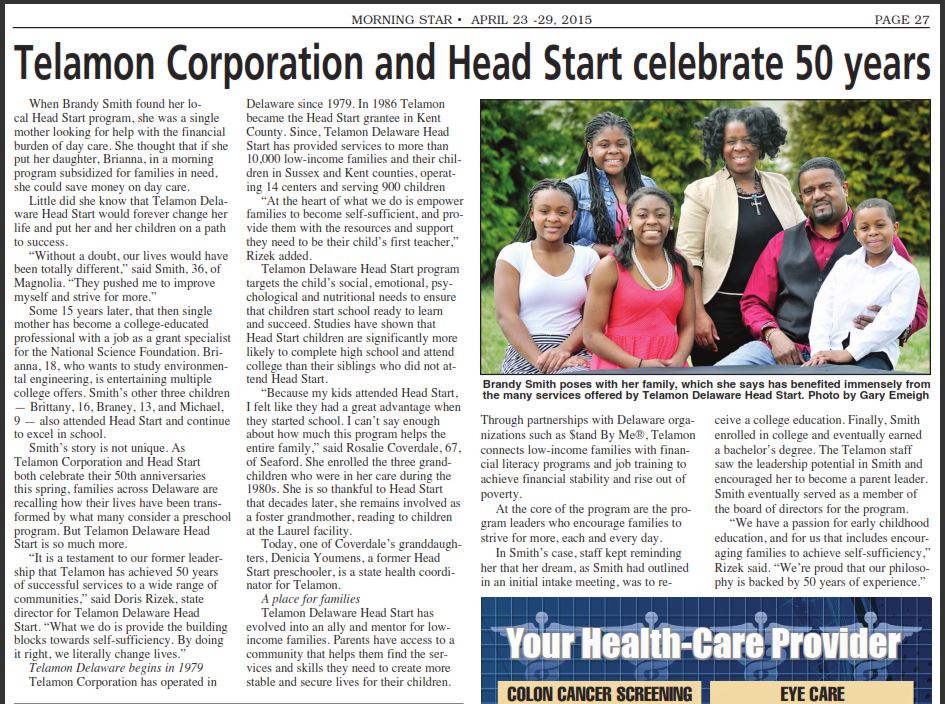 At the core of the program are the program leaders who encourage families to strive for more, each and every day.

In Brandy’s case, staff kept reminding her that her dream, as she had outlined in an initial intake meeting, was to receive a college education. Finally, she enrolled in college and eventually earned a bachelor’s degree. The Telamon staff saw the leadership potential in her and encouraged her to become a parent leader. She eventually served as a member of the board of directors for the Corporation.

“We have a passion for early childhood education, and for us that includes encouraging families to achieve self-sufficiency,” Rizek said. “We’re proud that our philosophy is backed by 50 years of experience.”

Brandy Smith poses with her family, which she says has benefited immensely from the many services offered by Telamon Delaware Head Start.
Photo credit: Gary Emeigh