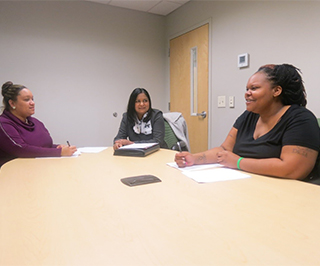 Since October 2011, Octavia has evolved from a new Early Head Start mother to a staunch supporter of all things Telamon. It started when her first daughter Zyia enrolled in Early Head Start and received a referral for speech therapy. Octavia saw how the intervention gave Zyia greater confidence. As a work-from-home mom with a cosmetology license, Octavia volunteers regularly at the center when she is available. She advocates that all families enroll their toddlers in some form of early childhood program. She promotes Telamon Head Start on Facebook and Twitter. Octavia was nominated by the North Carolina Head Start Association as Parent of the Year in 2015. She also became President of North Carolina’s Policy Council. She is tireless in her efforts to help other families see how they too can build better lives with Telamon on their side.