Skip to content
George realizes his dream of becoming a barber

Success Story:
George realizes his dream of becoming a barber 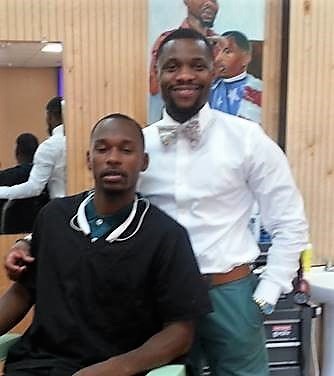 George’s dream has always been to become a licensed barber and open his own barbershop.  When George was young he would go the local barbershop in Edenton, NC and watch the skilled barbers cut hair. Even though George had no formal training or a barbering license, he enjoyed practicing the techniques he learned on friends and family.

George grew up in a farm working family. He saw firsthand how his family struggled to put food on the table and pay their bills. Times were especially difficult before and after the crop season. Living in such poverty impacted George’s judgment, causing him to make bad decisions and be influenced by negative peer pressure. Through all this, George’s dream of becoming a barber remained a constant.

George is happy to be earning a living in the career he always dreamed of and he is very grateful for all the support and assistance he received from Telamon-TRC's National Farmworkers Jobs Program.

In November 2016, George completed the barber program, obtained his license and fulfilled his dream of becoming a barber. Today, George is working at a profitable barbershop in Elizabeth, NC.  He also creates barbering how-to videos which he posts on YouTube. George’s success as a barber has enabled him to purchase a car and a home, and he is now married. George is happy to be earning a living in the career he always dreamed of and he is very grateful for all the support and assistance he received from Telamon-TRC’s National Farmworkers Jobs Program.

If you are looking to improve your work-related skills so that you can enjoy the greater financial stability that comes from a better job, we can help. Telamon-TRC’s Workforce & Career Services program offers several programs to help people of all ages learn new skills to pursue better jobs. Find a location near you today!