Success Story:
A Mom’s Journey from Chaos to Serenity 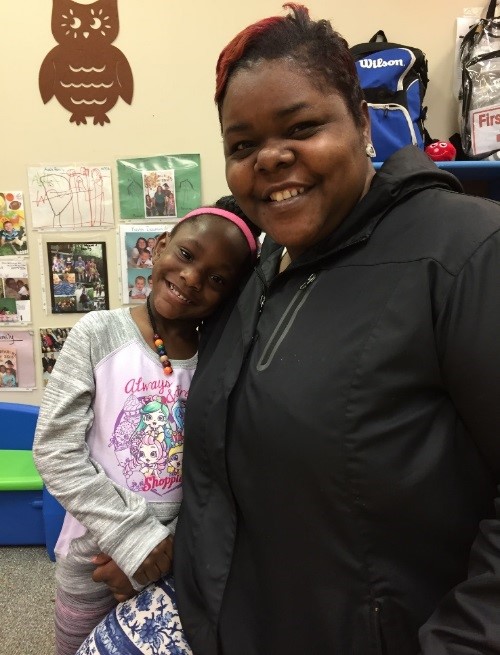 When Ebony found TRC Head Start, she was “all over the place,” had no organizational skills and as a mom, she was mentally absent. Heartbroken about the way her life was going, she was a self-proclaimed “emotional wreck” who used recreational drugs to deal with the challenge of having a very sick child.

Ebony and her daughter Miamor (Mia), who had suffered a traumatic brain injury, were living with Ebony’s mother in a tiny one-bedroom apartment. This became too much for everyone. Feeling guilty and stressed because of Mia’s medical condition, Ebony let her do whatever she wanted, whenever she wanted. As stress mounted, Ebony and her mother were not able to continue living together, so Ebony acquired transitional housing and moved out with Mia. However, with no car or money, a lack of parenting skills, and a daughter with few self-help skills, her situation still felt bleak.

Ebony felt the encouragement of everyone at TRC Head Start.

Ebony was paired with a case worker from TRC in the transitional housing program who recommended that Ebony apply for the Head Start program for Mia. Mia was eventually admitted to TRC Head Start, and their journey began. Ebony felt the encouragement of everyone at TRC Head Start. The caring staff met her where she was in life and didn’t judge her or Mia. While medical experts expected that Mia would learn slower than other children because of her brain trauma, Mia began learning at the same pace as the other children in the supportive Head Start setting.

However, Ebony was still overwhelmed. She was concerned that Mia might be taken away due to the lack of home structure, and her parenting skills. Ebony soon learned that TRC Head Start was a safe place where she could ask for help and build skills as a parent. Soon, Ebony began to feel that she was part of a big family within TRC Head Start. She and Mia also received food and other resources to support their basic needs.

“Peaceful” is how Ebony describes herself now, thanks to TRC Head Start and the various supports provided to her family. She has taken steps to get her debt paid off, with the dream of returning to college. Ebony plans to pursue a degree in the human services or social work field because of the impact of the help she received through TRC Head Start.