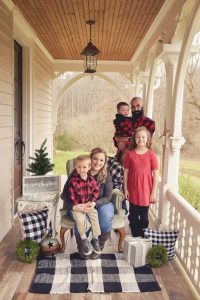 Danielle was a stay-at-home mom looking for childcare when she heard about Telamon’s Early Head Start (EHS) program in Elizabethton, TN. Her oldest son was one and a half and had never attended a childcare program. After being in the program, Danielle was thrilled that he learned his ABC’s, numbers, and colors; and he was fully potty trained by the end of his time in EHS. She was impressed by the quality of the program offered at Telamon, saying she loved the teachers and atmosphere at the center.

In addition to the educational services, Danielle worked with Felicia Adkins, Telamon’s family services specialist, to set a family goal. Danielle mentioned that she was interested in returning to school, so Felicia helped her research local options. Soon after, Danielle enrolled in cosmetology school. In March 2020, Danielle graduated, passed her exams, and became a licensed cosmetologist.  She immediately found a job and was excited to be able to provide for her family.

Enrolling my children in Telamon’s Early Head Start (EHS) program gave me peace of mind in following my educational goals because I knew they were in good hands.

Danielle’s youngest son is now enrolled with Telamon. Since he has a speech delay, Danielle has been impressed with the way the teachers at the center provide individualized services to help him improve his speech. Danielle feels confident that her children have a solid educational foundation, and she has gained new skills that will allow her to provide a better life for her family.