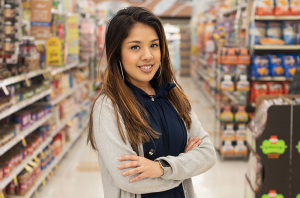 Meet Joane, who has been involved with Telamon in Michigan since she was a very young child, enrolled in Telamon’s Migrant Head Start program.

Throughout the course of Joane’s childhood, her parents traveled between Michigan, North Carolina, and Michigan, picking tomatoes.  In her own words:

“Growing up in a farm worker migrant family was difficult. Not knowing where we would live was the hardest part. Most of the time we would stay at a family trailer until my parents were able to find something. It could’ve taken days, weeks, and sometimes months before we were able to find our own place. I also remember there would be times when we would have really bad rainy season and it would destroy the crops. This would make it difficult for my parents to provide for us. During these hard times, my parents would go to lakes to fish, just to make sure we had food on the table.

Because we moved around a lot, my sister and I attended different schools every year until we reach middle school. Education was always my mom’s number one priority. She made sure we didn’t fall behind by putting us in after school programs and having us take special classes such as ESL. For me, it was hard to make friends at a new school and once I had, it’d be time to pack everything and move to a different state and start all over.”

I am grateful for the way I grew up. Every obstacle that my family and I would face together, made me work harder to reach my educational and professional goals. Telamon gave me the resources necessary to be able to reach my goal. They helped me out financially and guided me toward my goals.

Because her father is a long-time migrant farmworker, Joane qualified for Telamon’s National Farmworker Jobs Program (NFJP) – which enabled her to participate in our workforce development programs as a young adult.  Joane participated in Telamon’s workforce development program, while at the same time pursuing a college education. Joane was enrolled in Michigan State University’s College Assistance Migrant Program (CAMP), a program that supports children of farm workers with tuition assistance and supplies.

Joane graduated with a Bachelor’s degree in May of 2018 – thanks to the financial assistance, support, and guidance provided by Telamon – and her own hard work and perseverance.

Now a motivated, ambitious young woman, Joane is now working as a store manager trainee with large grocery store chain Kroger earning $50,000 annually—and has achieved a degree of stability and self-sufficiency in her life she never could have imagined as a young child.  She is able to help her parents financially – who are still working in the fields, moving between North Carolina and Florida. Joane’s future plans include going to grad school to earn an MBA.

This program has expanded her horizons and put her on a path to career success!

Since 1965 Telamon-TRC has helped individuals like you access services that lead to better jobs, better lives, and better communities. Find a Workforce & Career Services program near you today.